Opening his business in the Rutland Business Center, an industrial office park that offers warehouse access, saves owner Kyle May about four times on shipping costs.

Every other month a semitrailer brings in thousands of pounds of fitness equipment for his business, Austin Fitness Rentals. In the back warehouse he assembles the machines, which often weigh as much as 650 pounds each. The front half of May’s space is used for the showroom because 50 percent of his customers want to view the equipment in person. 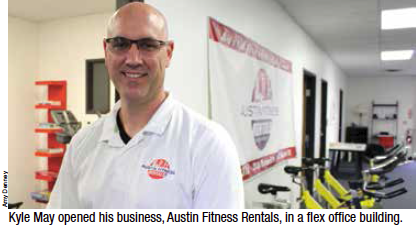 Opening his business in the Rutland Business Center, an industrial office park that offers warehouse access, saves owner Kyle May about four times on shipping costs.

Every other month a semitrailer brings in thousands of pounds of fitness equipment for his business, Austin Fitness Rentals. In the back warehouse he assembles the machines, which often weigh as much as 650 pounds each. The front half of May’s space is used for the showroom because 50 percent of his customers want to view the equipment in person.

“It’s really all about being able to provide a retail feel but be able to move heavy machines,” he said.

Emerick said the trend of nonindustrial businesses occupying industrial buildings has been increasing in North Austin for some time. “You see a lot of that in California, and I think we’re seeing a lot more of that here in Austin,” said Emerick, a native of Southern California. “… Look at the number of California-based tech companies that have a presence here. They’re influenced by that environment, and they’re bringing that here.” Industrial draw Besides flexibility, Emerick said many businesses choose industrial space because rents can be almost half the cost of leasing Class A office space. This is usually because a company will have to pay for elevators, stairs, lobbies and restrooms— known as the core or load factor—in office buildings. “You have to pay for all that, whereas in creative flex office spaces [it’s] your own space,” he said. The citywide average annual rent per square foot for Class A office space at the end of 2013 was $21.93 compared with $9.36 for flex space, according to CBRE. Davis Bass, who works on the industrial team at HPI Real Estate Services and Investments, said the company’s inventory of leased space in industrial buildings is dwindling in the North Austin submarket. “We may not have any vacant spaces in the area by the end of this year; it’s that healthy,” he said. “Another thing that’s hard in this area is there are not a lot of places to build. I expect it only to get tighter and tighter as this year goes forward.” The vacancy rate for flex space in the Northwest and North Austin submarkets dropped from 20 percent in the first quarter of 2012 to 14 percent in the fourth quarter of 2013, according to CBRE data. On the office side, vacancy dropped from 15.7 percent to 11.6 percent during the same period. Bass said many tenants in HPI’s flex buildings could occupy Class A office space but choose industrial buildings for the lower rents, large open areas and ability to offer amenities such as a coffee bar. “That’s what’s great about our buildings we have tall ceilings, you can do mezzanines, we have open areas [and] it’s a little bit cheaper so you can afford to have a gym in your space,” he said. “I think those things are really what, moving forward, people are into.” Adaptive area The industrial space in the North Burnet/Gateway area, which has a city-approved master plan and its own zoning code, is home to two breweries, the corporate headquarters of Game Over Videogames and a variety of tech companies such as Loan Science, a consumer lending and credit risk management firm that focuses on student loans. Loan Science relocated to Kramer Lane in November. When Sam Miller, president and chief operating officer, first saw the dilapidated warehouse, it had already been gutted to bare bones. However, the company saw potential to create a space for its professional staff and call center employees. The warehouse is also located near Lean Science’s former Arboretum- area office. “It turned out also to be competitively priced,” he said. “We loved the Arboretum area, but it’s a really high price point, particularly for a call center–type operation. This was a really good compromise between a higher-end office space and more warehouse space.” Loan Science also needed the ability to grow without moving to another facility. It plans to hire 20–30 additional call center employees by the end of 2014. “We’d been a nomadic company since we started, moving from sublease to sublease, and that takes a lot of time and distraction to move,” said Bill Weyandt, president and chief risk officer. “… We gave ourselves room to grow over the next several years without having to move.” Interim use The North Burnet/Gateway plan will phase out existing industrial use and instead focus on higher-density uses. This is designed to occur in the next few decades, but Christine Freundl, senior planner with the city’s Planning and Development Review Department, said converting warehouse space into office space is a great interim use to increase density. “It’s not going to change overnight,” she said. “It’s a good way to repurpose existing buildings. That’s true not just in North Burnet/ Gateway but in all [transitoriented developments]. It’s adaptive

reuse.” Emerick said renovating warehouses into creative office space is also a good return for a building’s owner. This allows the owner to maintain an income stream that could be used for future redevelopment as envisioned in the North Burnet/Gateway plan. “You’re buying at one food group and turning it into another, which is a higher, better use, so you’re getting higher rates,” he said.

The Struggle for Fitness is REAL!

How Water Can Help You Lose Weight